Welcome Guest! Your last visit was . You have made 118 posts! Please welcome our newest member, Kayla! 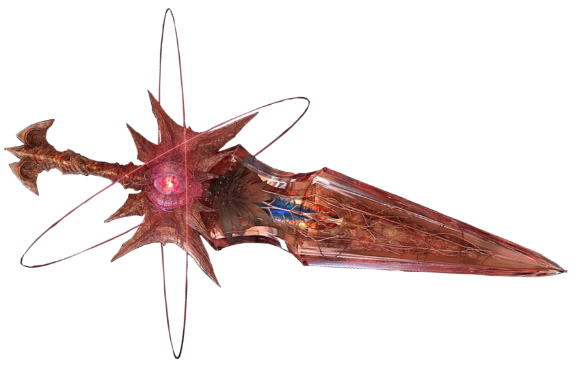 Name: Soul Edge
Owner: Nainai
Type: Weapon (Greatsword)
Rank: Ancient
Durability: 150 Weak hits / 54D
Description: Soul Edge was forged in the distant past by a nameless backsmith as an ordinary two-handed sword, but after being bathed in blood, hatred, and death it developed a malevolent will capable of taking over its wielder. The first named bearer of Soul Edge was the Hero King, Agol, whose strong will conquered the evil intelligence of the blade.
Length: 50in
Weight: 30lbs
Strengths:
- Able to change shape & Weight
- It deals the user's class in ranked damage to magical defenses (Max : S)
Weaknesses:
- Is really large and heavy it is normal form
- Anyone else can pick up the weapon and use it, however they cannot exit with it.
- Can be detected by anyone who can sense magic
- The sword itself has a voice, only to be heard by its holder, or to the older of the opposing blade.
- If the blade has no living owner, its voice can be heard to anyone around it. The sword's voice is masculine.
Ability:
Cursed Blade: The weapon can change its shape to take the form of any Strong Weapon that the user owns, or is in the current thread. This weapon does not gain the powers of the selected weapon. It can only change shape once per post, either at the end, or the beginning of the post.
« View previous topic · View next topic »

» barking Up The Wrong Tree [Private]
by Nameless Yesterday at 9:29 am

» Call Faith
by Nissa Drax Yesterday at 9:29 am

» Neverending Death
by Yoshige Yesterday at 9:28 am

» Netherworld Training : Soul Eaters
by Ryn Yesterday at 9:26 am