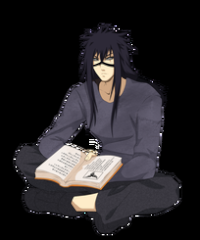 Name: Seigi Douchiwa
Nickname: The 7th Demon King, Demon King Sei.
Gender: Male
Race: Demon
Age: 120
Birthday: January 19th
Sexuality: Straight
Unique Characteristics: Seigi has a strange marking on his face, a single line that travels across his face, over his nose and cheeks. It's black, no wider than an half an inch, often mistaken for a scar but it's true origin is unknown. He has various scars from fighting covering his body, but nothing distinctly noticeable, except for the scars on his back, which are large and raised up higher than normal, the result of being whipped across his back.

For the most part, Seigi is humanoid in nature. His bone structure and muscles are more dense than they appear though, adding to his weight, so he weighs much more than he appears. Along with his bones being more dense, so is the keratin in his fingernails and toenails, making them stronger and able to use in combat. He can grow "claws" at will.

Being a demon, Seigi is granted senses that are a bit higher than the normal human, but at a price; they can be used against him. He can see better in the dark than most, but bright lights can be more sensitive on his eyes. He can smell extremely well, but things often overpower his nose, leaving him momentarily stunned. He can hear footsteps from behind a closed door, but a loud noise can leave him with a headache. Things along those lines. To the untrained eye, he does appear human in every sense of the word, but to those who have encountered demons before, he is clearly of devilish descent. The only main significances would be his pigmentation, which no matter the amount of sunlight he receives, he stays a light pale, as if he were sickly and dark circles around his eyes, as if he hadn't slept in a few days, both of which can easily be mistaken for human characteristics.

Personality: Seigi is a hot-headed magnet for danger. He's reckless, arrogant and careless, often getting himself and his friends into danger. Often seen as a bit prideful, he refuses to back down from any challenge, be it fighting against someone much stronger than he is or eating more noodles than someone else. But with pride comes honor. Seigi won't fight a defenseless opponent, believing that it would belittle himself to attack someone who could not fight back. Outside of combat, he usually keeps to himself unless he sees something he doesn't like or someone provokes him, which tends to be more often than he'd like to admit. He's a generally curious person, but wouldn't call himself much of an explorer or a scholar, and because of his recklessness, he's actually, if anything, seen as an idiot.

But, Seigi is also a loyal friend and will do anything for those close to him, often seeing himself as a problem solver. If he gets a friend into trouble, he'll be the one to get them out, no matter the cost. He is charismatic, capable and believes there isn't much he can't accomplish on his own, meaning that he DOES have tendencies to be a loner but would prefer to travel with a group. He's a survivor and a warrior and he's not afraid to walk the world alone. Despite being a former Demon King, he has straight moral compass, and if he wants something, he'll achieve through hard work. When he's not out adventuring or fighting, he prefers to relax in a calm environment, despite his chaotic nature, listening to "classical" music to calm his nerves, being true to the old saying that "music soothes the savage beast". Finally, in certain situations, Seigi can be provoked into a rage, usually brought on by the death of a friend or disrespecting his lineage or his claim to the throne of the Demon Kings.

Dislikes:
-Needles. He would rather die than have a needle poked into his skin.
-Bugs.
-Milk. He can't stand it.
-People who don't believe him and his lineage.
-People who disrespect him.

Motivations:
-Seigi wishes to reclaim his spot as a Demon King.
-He also wishes to become strong enough to defeat any and all other demons.
-Seigi is also motivated by finding a good group of friends. His entire life, he's had little to no friends.

Fears/Disgusts:
-As listed before, he hates HATES bugs. Any little creepy crawly will ruin his day.
-Losing a loved one. He lost his only friend while he was young, the experience leaving him traumatized.
-Being forgotten. He wishes for his legacy to be retold for centuries and centuries to come.

Eyes: His eyes are a dark brown, appearing black unless looking up close.
Hair: Long and black, it drops down onto his shoulders and his back.
Height: 5'9''.
Weight: 240 pounds. He appears much skinnier but his bones and muscles are much more dense than they appear.
Complexion: Pale, not ghostly, but not unlike someone who has rarely seen the sun. 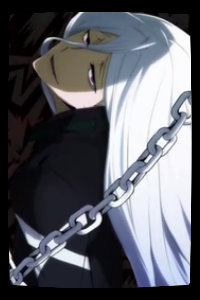 Bump. Added a bit of clarification to his appearance. Despite being a demon, he is for the most part humanoid. Anything "paranormal" or different will be added through spells or magic apart from his enhanced senses and increased weight, if i'm understanding correctly.
Chaostothemax

Alright, your senses will be considered to be a level higher than normal (level 2 senses when you're level 1, level 3 senses at level 2, and so on).