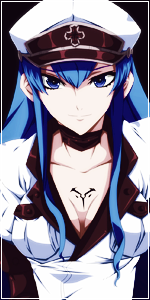 Personality:
Given how much of a mature woman she appears to be, Kiara can actually be one of the most ill mannered woman within the De fiore. All of this stems from her own moral that she doesn't care what others think of her, save for a select few people who she'd pretty much consider "hers". Unless she has good reason to do such, she doesn't believe in holding her tongue. She is extremely blunt and believes sticking to her opinion unless proven otherwise.

Albeit, she tends to save her anger for people she doesn't like, and while easy to anger, she isn't one to get aggressive quickly. She mostly prefers to simply keep her disputes at an understandable tone, giving simple smart insults with the hope that she wouldn't have to get angry and become rowdy. Most times she'd simply walk away, albeit she still doesn't believe in ruining her morals too easily. Once she does throw her concern for her own morals out the window though, she can become one of the most obnoxious women ever. She cusses like a sailor and is quick to result in violent if a person does or if she finds that she is losing an argument.
As mentioned, Kiara isn't as "professional" as she sometimes led people to believe she is. Along with her rather rude and assertive nature, she is quite immodest at times which stems from her not caring for the opinion of most people.

Her immodesty is best showcased by her obsession with drinking and sex. Whenever she becomes annoyed or simply bored she'd either start drinking at home or especially go to a bar and drink until she feels better. Unfortunately, she never feels better, and as such, while she has a high tolerance for alcohol she pretty much would always drink until she's drunk. When she's drunk all of her grace and professionalism is all forgotten. She is pretty much one of the worst drunks there is as when she's drunk she becomes violent, blunt, reckless and hormonal all at once. She constantly claims that she'd stop drinking, and she has a few times, but she pretty much always goes back to it whenever something just slightly annoys her.

One thing about Kiara that should never be underestimate is her intelligent. It is something that most people expect of her given how poise and levelheaded she carries herself, but most people still underestimate just how intelligent she is greatly. Most people don't know that in her young years she scored top of her class while at school, while mastering her magic quiet easily.

Pass of all this, the woman is generally a very intelligent person in pretty much anything. She is capable of picking up a task for the first time, and as long as she actually has the drive to do it she can become high competent in it in about half the time it would take others. She is capable of deducing things greatly, and while she fancies her chances in a fight, she is actually usually not fighting on the battlefield until she is truly needed since her intelligence is better applied for strategic purposes. She somewhat loathes her intelligence for this reason though since she'd much rather fight than do boring tasks.


Likes:
- Alcohol - Easily frustrated even though she doesn't show it, Kiara needs something to clam her nerves. Unfortunately, a simple walk in the park or counting the ten is never enough, so the woman is a borderline alcoholic. She spends most of her time in bars drinking until she feels more at ease, which typically is never. Regardless, she has a great tolerance for alcohol so she'd quicker drink out a bar before getting drunk most times. She has admitted that it is simply just a venting method though and she actually isn't much a fan of alcohol, if she had another option she'd stop.

- Animals - Kiara has very deep liking for animals. This stems entirely from her obsessive liking of being respected and obeyed, and since animals are extremely loyal, she likes them very deeply. She herself would admit that she likes animals more than most people themselves for this very reason.

- Combat - Kiara, in spite of how lax and lazy she may come off most times, she has a very deep liking for combat. It is basically like a high to her to the point that she'd be considered sadistic or masochistic. Albeit, following her deep dislike of being bored, she usually doesn't do things unless she'd certain she'd get a a workout from it. She trains quite frequently as well and is always thinking up innovative combat skills both for herself and the others within her circle.


Dislikes:
- Tedious Tasks - Kiara has a consistency to get bored very quickly. As such, the woman has a strong dislike for anything tedious, particularly things such as paperwork or meetings. If it doesn't involve fighting, sex or alcohol she finds most things quite boring and doesn't try to conceal it.

- Cigarettes - Before she used to drink to calm her frustrations smoking was Kiara's go to. But after trying her first cigarette she hated it and ever since has never smoke a never cigarette.

- Disobedience - Due to her considerable arrogance, Kiara has a dislike for beign disobeyed. She wouldn't react violently, but she pretty much holds a person in mind for disobeying her.

Motivations:
- To get stronger
- To master her magic
- To get rich

Could you expand upon this please? What does it look like?
Maleficence

Could you expand upon this please? What does it look like?