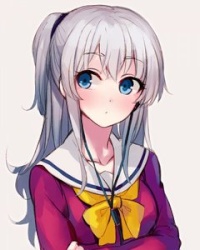 Name: Sahara
Nickname: The Crystalline Princess. Quiet Mouse.
Gender: Female
Race: Timeless
Age: Appearance: 17. Actual Age: Unknown Due To Longer Lifespan and Memory Loss.
Birthday: December 11
Sexuality: Straight
Unique Characteristics: She's mute, and a Timeless
Being a born a Timeless comes with a few special perks;
An abnormal control over the body that allows one self to repair any amount of damage other than death over time.
Due to the healing control one can kill off cells and force new ones to be made allowing them to change trivial things like hair, eye color, scars, etc.(cosmetics.)
Constantly being able to repair the body allows for one to slow the aging process calling for a longer than normal lifespan.


Personality:
Fearful: Sahara knew she was different the day she realized she couldn't speak. She knew it was going to be difficult for her to communicate with others. She knew that it was going to be difficult for others to understand her. Every since she woke up without a trace of memory, Sahara knew she was alone. Everyday, the girl lives in fear of others. What if they hate her? What if they can't understand her and try to harm her? What if she was always alone? Sahara tries to keep her distance from people as best she can. When spoken to, the girl begins to nervously shake, slowly back away, and try to run. Sometimes, this turns out well and other times it doesn't, mostly with men. Sahara fears men most of all. She believes them to be violent, overpowering, demanding, and full of hatred. This girl does her very best to avoid the opposite sex no matter what.

Kind Hearted: With a fearful attitude comes a kind heart. Sahara understands pain and fear more than anyone could imagine. She is all about love and compassion for those in need. She is about happiness and spreading smiles when she finds those that need it. Although it's not very often, Sahara can find herself tending to the needs of others when she has the confidence to do so. Wether it's helping the elderly or watching over a child, Sahara will be there every step of the way.

Adventurous/Clumsy: Being alone is quite scary, especially when you're a mute girl with limited memories. However, it can also be seen as a time of bliss. Although she can't ever hear herself, Sahara can definitely hear and see the world around her. This leads to her always finding the source of noises or hearing the sounds of things she's seen. The girl can always find herself in a new place looking for new things and hearing nee sounds. However, Sahara is quite clumsy. Her problem is the fact that she has no feeling in her feet whatsoever. Sahara has no idea why just as she has no idea why she cant speak. So, she never feels what's on the ground around her and ends up tripping constantly. She doesn't mind though because she doesn't like wearing shoes anyway.

Fears/Disgusts:
- The Darkness
- Thunder Storms
- People That Don't Understand Her