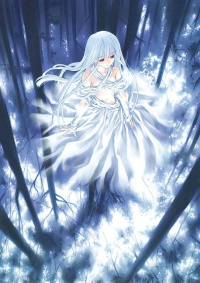 Name: Misrey
Nickname: Polar Philosophos
Gender: Female
Race: Ice Ghost
Age: 400 years.
Birthday: May 2nd
Sexuality: Bi
Unique Characteristics: Misrey’s hair is frosted and stiff at the tips. Fog comes off the bottom of her dress and slowly disperses until it disappears 1 meter away. As an ice ghost, Misrey is a physical entity, and cannot phase through objects. She is especially vulnerable to fire, and doesn't bleed. Instead, a flowing icy mist leaks out of wounds, and they will freeze over. The mist continues for 1 inch before it disperses, and frozen areas are harder to move, so a cut arm will restrict her movement.

Misrey will take 75% damage from physical attacks. Fire will deal 130% damage to her, regardless of whether it's physical or magical.

Personality: Misrey loves to read and study, particularly about old ruins and history. Most of the old ruins she reads about are now just sightseeing areas, no longer functional or part of any society. She is often quiet and tries to act calm, when in reality, she is really quite shy. She often gets very uncomfortable around strangers, so she only really talks to people she trusts. When she does talk, she’s usually quiet and polite to people she knows. If she's talking to someone she doesn't know, she comes across as embarrassed and nervous, often mispronouncing several words. She also interacts with other ghosts, helping them find their way and releasing them from any agony they might be going through. She doesn’t know anything about her life, most of her current personality stems from her time as a ghost. Misrey really doesn’t like conflict, much less killing, preferring to seal enemies away or avoid fighting altogether. When she does need to fight, she often times is either scared or just sad. To her, the idea of fighting and often times killing a living thing, cutting it's already short lifespan even shorter, is atrocious. If she ends up killing something, she is almost always regretful of her actions, and continues to feel guilty for quite a while after. She is terrified of both fire and blood, both of which will make her lose her "calm" composure and often times freak out. While she doesn’t need it to survive, she enjoys the taste and texture of cold foods and liquids, such as iced tea and some fruits. Misrey is caring and loving, but because of her shyness, she will only act that way with someone she knows and trusts. When around someone she doesn't know, she will often fidget with something in her hands, most often twirling some hair around her finger or just clasping her hands together.

Motivations:
- Unlocking her memories and remembering her life.
- Learning about the world.
- Helping other spirits find their way.

Eyes: Pale blue
Hair: Bright, pale blue, but white and the ends due to being frosted.
Height: 5’2’’
Weight: Weightless
Complexion: Really pale. Frost will sometimes creep around her body depending on her mood.

Re: Misrey, the Polar Philosophos