Enter, The Wild One [Closed]

Enter, The Wild One [Closed]

Jikura woke up, in an alleyway. "Where am I?" he'd think, being the usual amnesiac he was. He had some money in his pocket, enough to buy some food. He rushed to the nearest ramen shop, and bought a pork miso ramen bowl. "Thank you!" he shouted, quickly devouring the meal. He bowed, and went walking around the sandy village. He was full, hydrated, and being the forgetful boy he was.
Cockatrice 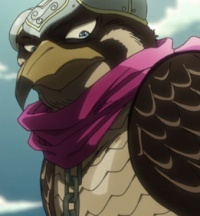 Jikura had been getting drowsy, and was getting thirsty. His body started to break down, his mind, easing up. He was slowly walking, but like a zombie. His eyes started to shut. He saw a water fountain, so he walked toward it. He drank some water, but then.. he fell down. Before falling "asleep", he'd see a silhouette of a bird.. "What the-"
Cockatrice

Richard watched as the boy walked extremely slowly, shambling as if he were already dead. It seemed as though he might have not picked such a good choice to follow after all; considering that there didn't seem to be other people around, however, he didn't have much of a choice but to follow the kid some more. He watched, bored, as the boy drank a little from a water fountain; this was almost unbearably mundane. Something should happen-

» Hey Batter Batter
by Ravage Bones Today at 8:21 am

» Targeryen
by Soul Eater Frederich Today at 8:17 am