Name: Dark and Sinister Afternoon
Nickname: Dasa
Gender: Female
Race: Living Painting
Age: 4
Birthday: May 10th
Sexuality: Asexual
Unique Characteristics: Dasa, despite whatever form she may take, is ultimately just a glorified painting. She was originally painted by a peculiar toon that made it a habit to make sure his creations literally came to life. He made Dasa's painting a very dreary one, gave the person in the picture (Dasa herself) a nightmarish appearance, and gave it the name Dark and Sinister Afternoon since it apparently summed up the picture perfectly. Dasa eventually broke the ultimate taboo and left her picture frame to traverse in the real world.

Being made of paint makes it relatively easy to shift one's form, but Dasa possesses two primary forms she prefers to switch between. The first of these two forms was her original form, the one she was originally painted as—a giant black mass with an uncountable number of white faces protruding from the mass. The faces all have functioning eyes, though their mouths do not move when Dasa speaks. Lacking any limbs, Dasa must pull herself across the ground in this form while shifting the position of her aces to prevent them from dragging against the surface. If someone were to touch Dasa—whether it be the black mass of her body or one of the white faces—he or she would feel cool paint (with some of the paint sticking to whatever touches Dasa). In terms of auditory, Dasa's voice sounds somewhat masculine but is very dark and low in tone in this form.

The second form is much more human, taking on the form of a young girl. At a glance, Dasa appears to be a regular person. She walks like a regular human, talks like a regular human, and can apparently do almost anything one would expect a regular human to be capable of doing. This form is her much preferred one, believing her other form to be too 'dark' to be considered art. Just like her true form, this human form feels like cool paint and even leaves behind a little paint on whoever touches her. 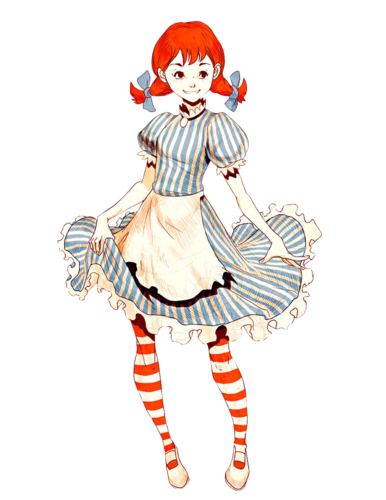 No matter the form, Dasa is just a mass of paint in the end. This trait shows in some given circumstances. When she walks, for instance, she leaves behind a subtle (less subtle in her true form) trail of paint. Even more alarming is the quirky reaction her body has toward water; her body will slowly dissolve in rain or while submerged in water until she is subdued as a puddle of thinned paint.

Other things to consider with a being made completely of paint is the fact that Dasa has no organs, no bloodstream, nor any bodily system whatsoever. In fact, the only reason Dasa is even sentient in the first place is not because of any inherent bodily capabilities but rather because of the strange life-inducing magic of the person who painted her.

Personality: Contrary to the sinister appearance of her true form, Dasa actually exemplifies joy and merriment. Under the guise of her human form, one can almost always find her with a smile plastered on her face. One might even say she fulfills the trope of a naive teenage girl with no understanding of how the world works. This, however, does not legitimately answer the source of Dasa's happiness; she does not find any cheeriness in bliss ignorance or in an over-optimistic mindset but rather in an ambition to make the world artistic and therefore more beautiful. What she considers 'art,' though, is rather unorthodox but a driving force in her happy disposition. She firmly believes that true art is literal happiness and its physical manifestations. These manifestations are pretty basic, including but not limited to smiles, rows of flowery gardens, and a bright and beautiful sun.

Dasa does not consider herself a violent person. She finds pointless violence to be contrary to the nature of true art after all. When she is inevitably place in the way of danger, however, Dasa is no pacifist. She is sure to pursue a malicious course of action (while wearing a smile) should it be the only sensible thing to do in the face of something that damages her "concept of art"; that is, an action that could be considered ugly, such as desecrating something cheerful or committing theft. Despite this, she is much calmer under the pains of combat than what a normal person would be. This optimism in battle can be attributed to her own natural cheeriness, a mock feeling of invincibility with her unorthodox physiology, and a humble desire to make and keep things happier. In keeping with this idea of making things happier, Dasa is usually one to bestow mercy and leniency upon those she bests in combat.

Re: Dark and Sinister Afternoon