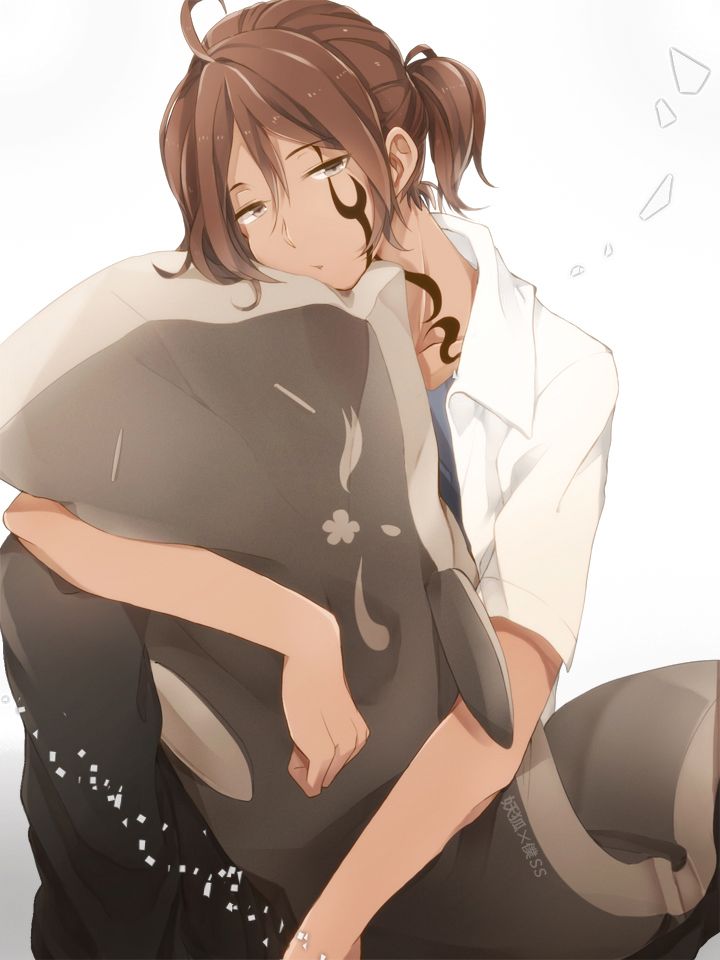 Name: Gate
Nickname: none
Gender: Male
Race: Human
Age: 19
Birthday: August 3rd
Sexuality: Bi curious
Unique Characteristics:
- A brand rests on the back of his neck, of a fist with a number in the center. His number is 7119.
- A magically ingrained tattoo runs down along from his left eye to the left side of his stomach, a tribal looking tattoo given by his mother to mark his heritage to him so he would never forget.

Personality: Gate is a free spirit. A life in captivity lead to a large distaste for complacency and conformity. Gate finds it hard to stay in one place and finds it more difficult to adjust to new people. Conversation is not as hard, but trust is a different issue entirely, for who knows who's after you. Gate's life after escape is spent running ahead while always looking over his shoulder, and paranoia sets in quickly if circumstances attempt to restrict his freedom.

Gate likes the simple things, and after reaching a lifetime goal, he finds it hard to have long term plans. No prior family or friends outside of his mother makes it easier to stay detached, and Gate finds difficulty breaking out of the habit of being a loner. He does things his way, he always has and it helped him to survive. With such a background, he is surprisingly cheerful and optimistic, and his personality isn't one to bend and change to the will of others easily. He is easy to talk to if you get around the difficulty of approaching him without him running off.

Death and struggle litters his history with bloodshed and moral conflictions. Though he values life, when it comes down to saving his own he is quick to killing, and it gets easier each time. He has no patience for authority or authoritative figures, and rules are guidelines made to keep people in line like cattle. Gate is no cattle, Gate fought for freedom before and will do so again. Though Gate is very gullible, he is quick to believe if it means he keeps his freedom. There is one person he trusts above all else, however. The one person who cared for him and nursed him back to health. When he lost everything, he was found and raised, he was cared for beyond the life he was born in. That kindness he will repay, in full, if ever given the chance.

Motivations:
- Freeing his home.
- Repaying kindness once given to him.
- To be truly free, never having to look around the corners for the past to catch up.