You are not connected. Please login or register
Go to page :

The Goat and the Multi-Personality Psychopath [Private]

Was that... crackling? One of Toriel's droopy ears perked up, letting in more of the sound so she could hear it more clearly. It... was! Almost the sound of fire! Did that mean there was someone else nearby with a camp perhaps? Someone that could help them find their way out of this snowstorm? Even with Toriel's thick, white pelt that helped keep her warm, the cold was surely starting to sink into her skin, and how much worse would Sciocco be without anything but the clothes on her back to keep her warm? "Sciocco, hear that! A fire! Maybe that means there's people nearby!" came the happy call of the woman. She got to her feet, though stopped again. It was getting... louder? Was this thing mobile? No, it was much louder now. A fire could not even survive out here in the wintery winds of the mountain, so just exactly how? That's when orange flames tore through the air from a stone, bringing the area alight with fire! Fire and snow, burning and freezing, what was going on here?! Was it the power of magic? Or just the twisted functions of the land? Either way, Toriel would rather not have her fur seared. "Oh, Sciocco, there's trouble!" she cried out. It was one disaster right after the other, and this here was just abysmal.

Toriel felt herself swept from her feet once more, catching as much of the breath that rushed out of her lungs as she was hauled onto the summoned creature's shoulders. So much was going on at once, far too much for the poor old lady to register at once. Without much resistance, Toriel allowed herself to be carried off, watching as the flames jumped and danced about , gradually growing bigger and bigger. What... was this...? Then, things suddenly went white. Toriel found herself sunk beneath the residue of the avalanche, sinking a few feet into the snow as she cried out for help. Had the summon tripped? Was this.. how she was to die? Smothered away underneath a thick sheet of snow, never to be found by anyone again..? Toriel hit the bottom, and there was well enough snow to bury her alive, though with the bit of light from above, would not suffocate! Toriel grunted and squirmed, freeing herself from the snow as a fuzzy head popped free. Fire raged all about them! Sciocco would freeze down in the snow without anything! Toriel hopped out, looking about for the human-shaped hole that was Sciocco before diving in beside her. Once sunken in, she'd hug onto her to help keep her warm until the fire passed.
_______________________________________________________________________________________________________
[ Toriel Dreemurr | Frisk | Swirly ] 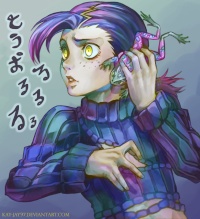 Sciocco groaned a bit. She was pretty banged up, and it was very clear that she was absolutely exhausted. She laid in the snow, curled up and breathing heavily. When Toriel latched onto her, she didn't resist at all. Instead, she latched back, turning the current situation from desperately hiding from the raging fire, to calmly cuddling in a very cold environment. Sciocco blushed and smiled as she held on. Toriel's fur felt nice and warm.

Suddenly, Sciocco heard a ringing noise. She widened her eyes at the sound and looked around for it without getting up. When she found the source, she was surprised to see that it was yet another rock. She picked it up and held it to her face. "Diavolo! Oh man, is it a relief to hear from you!" She said, relieved. Her gentle, relieved voice, however, was met with a stern, loud voice. "What the hell are you doing, Umano! You've gotten us all into so much trouble! I can list at least 5 reasons to smack you in the face right now..." Visivo's voice went on for 10 minutes about how Sciocco had gotten them into so much trouble and what an idiot she was. After he was done, Sciocco spoke up again, giggling softly. "Hehe, yeah sorry. I'm a dunce, aren't I?" She was laughing, despite her situation. She put down the "phone" after a few "yeahs" and looked over at Toriel. "We've gotta get out of here, or Visivo's gonna get really mad at us." She said with a surprisingly positive tone. Sciocco smiled and sat up slowly in the now dome-like crevice in the snow they were in. "Do you know where we should go now?"
Toriel

Toriel latched to Sciocco, the larger woman almost completely overshadowing the small and frail girl as she looked up from the hole in the snow they made, clinging Sciocco to her body quite tight, yet not too tight neither. A gentle and caring hug like a mama bear protecting her young. The fire shouldn't have lasted long (or been there at all in a place like this!), and Toriel waited quite a while, almost an entire hour, before daring to release Sciocco and climb out the snow. It was quite difficult with no solid thing to grab onto, but eventually Toriel found her way out, gasping for breath from the effort. All this work on those old bones of her's...

One out, Sciocco made for... another rock? Like before she held it to her ear like a telephone, speaking AND holding conversation once more. This girl definitely had a few screws loose in her, and Toriel just scratched the back of her head and waited. Maybe in due time she'd figure out who this phantasmal person she was speaking to. Once Sciocco was done, she said how she'd be in trouble with Visivo if they didn't leave soon. Wait... wasen't Viviso the one from before? An altar ego maybe? Toriel left that conclusion aside, promising to return to it later. For now, the question of leaving still stood. "Good question..." Toriel sighed, looking about her surroundings. The snow had let up slightly, allowing more vision. "We'll just start walking I suppose. We are bound to run into something eventually." Beckoning for her to follow, Toriel began her treck across the snowy wastes.
_______________________________________________________________________________________________________
[ Toriel Dreemurr | Frisk | Swirly ]

Sciocco got up slowly, making sure not to make her aching body hurt any more than it already did. Once she was up she stared blankly into the space in front of her and spaced out. Why did this happen to her? Was it fate that she'd get stuck with this goat lady trying to find her way to Kai in a freezing cold environment? Unlike most things in life, this confused her. For the first time in so long, Sciocco was genuinely confused. What was she to do now?

Sciocco was snapped out of her stupor by Toriel beckoning to her. She started walking and followed her. As she walked, the cold started getting to her and she started shivering. She sighed. Walking with Toriel was nice, and she was a nice person, but after a while, anyone would get boring. The only thing that kept Sciocco with Toriel was the fact that otherwise, she might've been freezing to death. At least, this is what Visivo was thinking. Sciocco herself hadn't thought of this, and stuck with Toriel because she was nice, warm, and staying with her got them in all sorts of fun situations. As they walked, she thought to herself. I wonder what fun things we'll come across next?


((OOC: You'll have to come up with the next thing. It's hard to keep thinking things up.))
Sponsored content