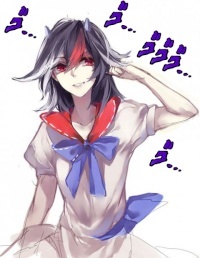 Name: Vi
Nickname: Vivian, Viola, Vira...Anything starting with Vi.
Gender: Female
Race: Human
Age: Body is 12, mind is 21
Birthday: January 22nd
Sexuality: Straight
Unique Characteristics: Vi ages more slowly than normal, has a +1 level in strength, and has amnesia; she cannot remember anything of her previous life except the first 2 letters of her original name.

Personality: As a fusion of her previous two personalities, Vivian and Vi, Vi has a mix of their traits. Like Vivian, Vi is a shy, curious girl, who has a hard time making conversation with other people. She is also very squeamish, disliking blood and guts and avoiding them when she can. Her old stutter has vanished, but she still has a dislike of speaking; it’s not uncommon for her to drop a conversation simply because she doesn’t feel confident in talking anymore. She much prefers listening to talking; she is great at listening to people talk about their problems, and likes to offer suggestions. The one thing that’s guaranteed to get her to open up are books; she loves talking about books, whether it’s things she’s read or new material for her to seek out.

Once Vi emerges from her shell of shyness, the other half’s personality traits start to emerge. When Vi talks to people she knows, she is blunt and often loud; she’s been known to realize just how loud she’s being, and suddenly stop talking out of embarrassment. She is much less guarded when around people she knows, and has been known to jokingly tease and prank her close friends. She would never prank her friends in a harmful way intentionally, but she has a tendency to not think things through; when they backfire, she often feels terrible about the result and begs for forgiveness.

One of the things that fascinates Vi, just like in her previous life, is the concept of magic. She loves finding out about all of the different types of magic; she will often seal herself away in a library when she discovers one, reading about the history of the area’s magic and the people who use it. She loves meeting people with new skills and abilities; often the best way to strike up a conversation with her other than books is to question her about magic.

Likes:
- Sweet and Sour food
- Listening to people
- Saying what she thinks

Motivations:
- Finding out about the world’s magic
- Getting stronger
- Living freely Re: Vi, the Amnesiac

Everything seems okay, however I'm not too sure on the (+1 strength), but for now I'll approve the character, but there may be some required changes in the future. Thank you for joining the site, I hope to see you around! Re: Vi, the Amnesiac