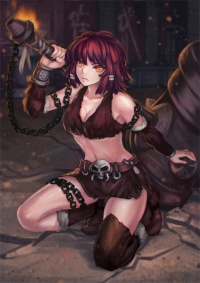 Name: Saige (Adopted name, not real name)
Nickname: Flame Barbarian
Gender: Female
Race: Cursed Human
Age: 12
Birthday: May 2nd
Sexuality: Bi
Unique Characteristics: Saige's curse weakens her mind, making her more sensitive to any form of trauma or emotion. This also makes her more vulnerable to any form of magic that would affect one's mind, such as illusions and Spirit magic. As side effects, however, Saige is tougher, has bright orange eyes, and can see in pitch dark, though only in shades of red.

Saige has a massive sweet tooth.
Since Saige was raised in the wild, she has little to no sense of shame.

Saige is a very emotional person, and will often go to the extreme with a given emotion. The most strange quirk about this strange disorder is her tendency to be extremely irritable. This "irritability" results in her actions being driven mostly by annoyance and anger. Saige will often slam on a table, or smash a rock against something, because someone is annoying her or she is just feeling outright angry. She also often lashes out at people, yelling at them to "shut up" or just throwing something at someone. On the other end of the extremes, if Saige is happy, she will become ecstatic, if she is sad, she will be depressed. Saige's emotions are all over the place, making her not only irritable, but also making her dangerously unpredictable.

Saige's personality often causes her a lot of trouble in life, though it brings along that which motivates her the most: fights. She will fight almost anything, whether it be a person, an animal, or even just a wall. In general, Saige isn't very smart, though she is very battle-smart. She knows how to strategize, and can come up with a strategy when it's needed. Even when she's in a rage, she won't go after someone who's clearly out of her league. When she's fighting someone, even if her strategies fail, she will keep on going. She will relentlessly attack an opponent she is fighting until either she wins, or she is forced to retreat.

Saige grew up in the wilds, more of forests and valleys than buildings and roads. As such, she has little to no knowledge of how society works. She doesn't follow most rules set by most people, not because she doesn't like them, but because she simply doesn't know she's supposed to follow them. Although on the other hand, Saige mostly despises the concept of "Society" as a whole. The idea that several people are supposed to follow one person's example, and several other things about Society has never sat right with Saige.

Likes:
- Fire
- Spicy and/or Sweet Foods
- Bashing things, whether it be with her fists or a hammer.

Motivations:
- Fighting all the things. Especially the strongest thing.
- Getting stronger
- Find the source of the curse.

Fears/Disgusts:
- Suffering Trauma or Amnesia.
- Dressing up nicely, especially in a dress.
- Complete Silence (No background noise, no voices, no anything.)

Re: Saige the Flame Barbarian