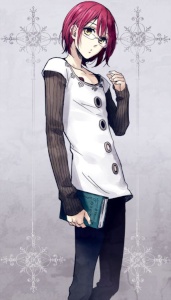 Name: Emotion
Nickname: Empathy, Moral, and Personality are all names she has used in the past.
Gender: Ambiguous, though physically female. (Use female pronouns for simplicity)
Race: Doll
Age: Unknown.
Birthday: May 21st
Sexuality: Asexual
Unique Characteristics:
As a Doll, Emotion has the following characteristics:
- Can't feel emotion
- Can't feel pain
- Is essentially a living corpse
- Takes 1/2 damage from death-element damage
- Takes 2x damage from fire-element damage
- Each body part has it's own health
- Immune to healing
- Can live as long as her head remains intact
- Body parts can be sown on if they are from a compatible donor
- Body parts must be changed every 2 threads or they stop working
- Can only sow herself back together if she still has both arms
- Any body part sown onto her will change to assume her original form
- Becomes disabled for 10 posts if decapitated
- Skin feels cold to the touch.
- Doesn't have any blood. Emotion has stitch marks on several parts of her body, the most noticeable being on her neck, left wrist, right ankle, and in a circle on her chest around her heart. In the middle of the circle, there is a tattoo of a goat.

Emotion: Intellectual, Impressionable, Ironic
As a Doll, Emotion is ironically unable to feel emotion or empathy. As such, she is very likely to offend people, or say things that she shouldn't. She is also very analytical and intellectual, looking to learn through books or experience. Emotion's memory is almost perfect as well, remembering averything she learns with 99% accuracy. With these two facts combined, Emotion has a tendency to create plans that prioritize efficiency and results over losses and casualties. This can involve putting someone at risk of something like losing a limb in order to deal a major blow to someone. Emotion is like a child in that she is very gullible and impressionable, which makes her very easy to ally. Though she has no sense of sympathy, seeing people as objects as opposed to people. Very often, Emotion will follow someone around in order to learn as much as she can. After she has learned everything, she will attempt to kill off whoever she was following, as they are of no more use to her.

A Nameless Guise of Emotion
Emotion does not feel emotion, though has created a guise to try and fake it. This guise is female, and acts much more childish and enthusiastic. This is a "mask" of sorts that Emotion wears in front of other people in order to try and fit into society. It works surprisingly well, and she has melded into society pretty well. She is very energetic and enthusiastic, and will often jump around and pose fabulously. Though she acts this way, if you listen to her voice close enough, it is possible to hear a monotonous inflection in her voice that makes it clear that she is faking. She adores books, and has made it a goal to construct a massive library with every book in Pandora. Parts of this personality, such as the love of books and the posing have become part of Emotion's true personality.

Dislikes:
- Sticky substances like syrup or slime.
- Uneducated people. (Or stupid people to be blunt)
- Rowdy, Unsupervised, Snotty or Rude/Impolite Children (Most people under the age of 13, basically)

Motivations:
- Learn of the emotions of living beings
- Learn of human nature, and discover how and why humans and other sentient beings exist.
- Collect and read every single book

Fears/Disgusts:
- Fire
- Being just a head
- Not being able to move

Re: Emotion, The Doll [Done]