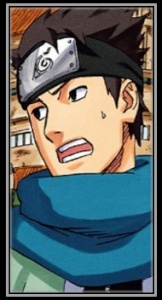 Personality: Konohamaru is the grandson of Hiruzen and Biwako Sarutobi as well as the nephew of Asuma. He usually hangs out with his two friends and team-mates, Udon and Moegi. Together, they call themselves the "Konohamaru Ninja Squad". He and his team-mates constantly try to sneak up on Naruto Uzumaki with poor executions of the Cloak of Invisibility Technique. Konohamaru's biggest influence is Naruto himself, looking up to him as a role model. At various points, Naruto and Konohamaru appear to have common bonds between them, such as use of the perverted techniques, determination, and fiery attitudes. Konohamaru ends many of his sentences with "kore", much like Naruto does with "Dattebayo!".

ven though Konohamaru and Naruto pretend to be rivals, the two clearly have a deep and understanding friendship. Konohamaru idolises Naruto in ways that no other person does, which was also shown when the two first met, with Konohamaru calling Naruto "Oyabun", which roughly translates to boss. He opened up to Naruto and told him that he was sad because nobody saw him for who he really was, instead, they only saw him as the grandson of the Third Hokage and was always called "Honourable Grandson" instead of Konohamaru. He liked Naruto because he thought they were similar. They eventually became very close, with Konohamaru constantly calling Naruto "Niichan", and Naruto also taught Konohamaru some techniques that he himself excels in.

After the great war, Konohamaru is much more strict but also dense at the same time. When Bolt defaced the Hokage monument, Konohamaru failed to realize the pranks were just a ruse to get Naruto's attention, who is constantly busy due to being Hokage, the exact same situations he faced with Hiruzen in his youth. In many ways he wants to be the one to bring life back into the Hidden Leaf Village. He feels like it's his duty to live up to the honor his great friend, and rival, Naruto had done for his village.

Fears/Disgusts:
- The Third Hokage
- Experiencing another Shinobi war
- Dying, (Don't we all?)