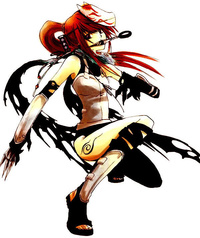 Personality:  Xia is a calm girl, she's been her whole entire life. The red-haired girl is able to always keep a bland persona. She wants nothing from anyone really, she has been alone her whole entire life. Xia doesn't think, 'bad or good', she thinks of whatever can help her get along in this cruel world. The only thing she is willing to make an exception to her personality for is her family or the people that she truly loves.

When she's in battle, Xia doesn't joke/mess around. With nothing to do her whole life, she's trained, she learned about many different fighting styles, she's practiced. She keeps a calm mind and persona like she does in everyday life, and does not attack her foes with full out anger, but focuses on the things that will bring her victory in battle. If you have a short-coming, she'll find it. Xia has no remorse about killing like said before, she doesn't categorize things as good or bad, she does whatever is right for her, and if that is killing someone, she doesn't mind. Every stab of her blade will bring you down.

With the village, she is still like her normal self, uncaring. She might feign interest or fake being interested in her speak, but she doesn't really care for people unless she loves them. Xia is very distant but very observant. The girl will never forget a face, take the time to examine their weaknesses, and make sure she knows how to take someone down if needed. People can call her a mystery, but she's just a girl who doesn't care for people. The way to win is always on her mind, it's either fight or flight, what she's been raised on her whole life by herself. She hardly makes any friends unless she thinks them worthy. The only person she really loves the most is her mother, trying to get accustomed to actually getting to know her.

Likes:
- Taking care of herself.
- All different kinds of weapons.
- Enjoying life as she goes.
- Her mother.

Dislikes:
- Not receiving a challenge.
- Other people.
- Being beat in battle.
- Sometimes her mother.

Motivations:
- Proving to her mother that she is great.
- Becoming the greatest ninja.
- Learning about every weapon.
- One day becoming someone who is loved.

Fears/Disgusts:
- Not being noticed by her mother.
- The fear of constantly being alone, gained from her lifetime.
- Being hurt physically, mentally, and emotionally to a certain limit.
- Dying before her goals are reached.