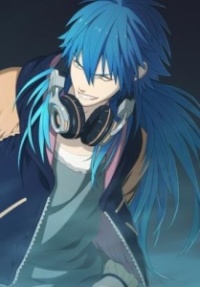 So this is my shot at doing a fanfic the universe is currently tbd. This story is going to follow that of the OC: Izuki Raizhou as he attempts to find his way back 'home' depending on what 'home' is at the end of the road. yes there will be a ship between him and one of the characters; if you wanna leave constructive critisism comments, suggestions, ideas, etc. that'd be awesome! (yes i'm willing to add more OCs to the story, please tell me how to add them into the story). whew! now that that rant thing is over here is his profile!

Hair: blue hair tied up in a ponytail

Personality: usually very kept to himself, Izuki is a kind and caring person. He avoids speaking to his fellow companions avoid revealing that he is not from their world; or rather, their universe. when he is in combat he usually fights in a very strategic way as he uses his sword: Kazarath to fight alongside the mysterious ring: Iluminia.

History: Born in the town of Troy, Illinois; Izuki grew up with a normal life, minus the fact that as he grew up he was constantly being picked on to the point where he had finally snapped and hit said bully. after this incident this caused him to now keep to himself seeking solace in listening to music and playing video games.


The story will begin next post! cant wait to start this up! also as a side note: the characters from the series may not act the same as in the series but i'll try to be as close to the characters personality as i can get
Shoni

Staring outside the classroom window into the greying clouds as they floated by, Izukis orangish colored eyes looked bored out of his mind as he was forced to listen to his professor; a man in his early 50s, standing at 5'7", short slowly greying brown hair, green eyes, a rather lean build as he was wearing a pair of tan pants,a pocket red t-shirt holding onto a book they had been reading for the past what felt like decade. "Remember this as my personal motto class; the worth of a man isnt determined by his life style but is in fact determined why what the man does with his life" he told the class as the bell rang signaling class to stop, "alright remember class i want pages 77 to 107 read tonight with a two page report double spaced about what you found out in the story!" the man told the students as they all got up from their seats and headed out the door. As Izuki began to follow suit, stretching as he stood up at a whopping 6'6", 200 lbs, wearing a red and orange plain t-shirt with blue denim pants and a set of blue sneakers, his professor walked up to him putting a hand on the young mans shoulder he motioned Izuki over to the side.

Now standing across from each other izuki rested his back against the wall sighing as the man pulled out several papers. "Izuki, i've re-read the reports you've been turning in and i've noticed a slight trend among them: the quality of your reports has declined from being one of the best students to the very terrible quality, and i've noticed that you stare off into the sky..is everything fine at home?.." he asked looking worried as Izuki simply nodded his head. Recieving a sigh from the elderly man he began speaking again "I don't want to bring these reports quality up with the dean..so please give tonights report your best please?" he asked him before only getting a simple 'yes sir' from the other "okay, thats everything" he told izuki who simply turned on his heels and moved out the door quickly.

Arriving at the parking lot, Izuki scanned the area to notice a red van sitting over to the side of the parking lot with a female looking to be about the same age if not about a year or two younger, wearing a green dress with a yellow flower design on it as it ended at her knees,a brown hooded jacket, and surprisingly a pair of white and green tennis shoes, with her long blonde hair ending at mid back and brown eyes with a tan skin tone leaning against the van looking around eventually waving at him making him walk to the van.

Meeting the woman now obviously his age at the van she took a step forward with a serious looking face before suddenly smiling and hugging him...hard "cousin! aloha!" she said "i missed you so,so,so,so,SOOOOOOOOOOO much!" she said now sounding like one of those annoying siblings with tons of energy; "i missed you too..now do me a favor please.." he said "hm?" "let me go!" he barked making her let him go now letting him take a deep breath of air. "sorry i'm just really glad to see you again Izuki!" she told him now almost bouncing "i can tell from your energy malika" he replied scratching his head as he felt a rain drop fall onto his head as slowly rain began to fall more and more "we should go..like..NOW" he told her making the woman nod as soon rain drops began pouring making the duo quickly get into the van before Malika started up the van and immediately drove away from the college.

Arriving at a green two story house, the red van pulled into the garage, the sliding door closing behind the rain covered vehicle. Stepping out of the van, Izuki shook himself like a cat to get the rain water off of him before pulling his backpack out of the vehicle and closing the door. Walking into the home from a side door in the garage, he was greeted by a "meow..." from a small brown and white cat sitting on a worn mahogany looking hutch making him smile " hello there celes you been a good girl while i was at school?" he asked the cat with a small smile as the feline replied with a happy "meow!" as it hopped onto his shoulder with a purr.

Walking to a set of stairs Izuki put one foot on the bottom step before looking back at his cousin "i'm going upstairs to do my homework" he told her as he began walking up the stairs, "izuki! I know...it's been a year hasn't it?" Malika asked with concern making the young man stop "a year since the accident.. isnt it?" she asked worridly; looking back at her, izuki looked away from her and walked into his room slamming the door shut.

Entering his room, a twin sized bed with blue covers on it next to a wall with a tv stand thing a few feet away from it with an HD tv on it and a ps3 next to it while on the left side of the stand where the console was stood a mahogany dresser which held a variety of final fantasy memorabilia and the opposite side of the room stood a computer desk where a tower computer sat and a black rolling chair sat infront of it. Sitting in front of the computer Izuki booted up the machine as he set down his backpack, pulling out said book they were reading and began to read the assigned pages while the computer booted up.

After two hours of reading and typing Izuki practically slammed his head on the desk panting as he felt like he had ran the mile five times over, now all that was left was alt-s and print..which he started until the computer suddenly went blank and turned off, if you could see his face his left eye would be doing the ever so famous eye twitch "DAMNIT!" he yelled out before being met with blackness as the entire room was now without light or power. Sighing, Izuki stood up from his chair and proceeded to where the door was as he felt for the knob which he grabbed and proceeded to turn but with no avail as he tried opening it.

"This isn't funny Malika!" he called trying to force open the door to no success "damn it..." he was now panting, slowly sliding down the firmness of the door. Gazing up at where he assumed the ceiling was, Izuki closed his eyes catching his breath "Izuki Byakko...." a quiet voice whispered into his ear making the young man stand up quickly, and spinning looking around him as best he could; "who's there?" he called slowly bringing his fists up ready to punch someone or something.

Almost ominously the TV turned itself on showing a white screen at first making Izuki looking from the door to the light the screen gave off making him curious as he proceeded to the tv. Now standing infront of the tv screen, static soon took over the screen making it almost impossible to tell what was on "Izuki Byakko..you are the one.." a voice whispered in his ear again "damnit who keeps saying that?!" he yelled spinning around only to be met with a demon face staring him down. "holy shit!" he cried out jumping back as white ghost like hands emerged from the tv, gripping a hold of various parts of him making izuki begin to struggle wildly "let me go!" he cried out as the hands pulled him into the tv causing him to lose consiousness as he struggled and the hands pulling him back down into the tv before the screen shut off and the demon face disappearing.

((oh crap! where is Izuki being taken to?! what does cruel fate have in store fore him that it called him 'the one'? all will be revealed as the story progresses as the ring of memories begins!))

so please leave a comment! tell me what you liked and didnt like (i know capitalization and punctuation i need to work on) what would you like to see more of. constructive critizism please
Fetus

Re: Ring of Memories

Re: Ring of Memories