Akira had figured it was about time to speak with their village's guest considering all the commotion it had been causing. It hadn't been harming anything, simply making the people nervous with its presence. Perhaps, she would be able to understand her a bit better, so she could calm her people. She had known for some time that her people couldn't simply accept an individual if their appearance was threatening or terrifying to behold. She had known from experience, from the pain, from the feeling, yet she had hopefully persuaded the elders from any rising suspicion, at least for the time being. At this point in time, there was only one thing that Akira could do to continue to protect this creature. She needed direct confrontation and verbal agreement that this creature was no threat to her village or people. Now, she just hoped she was correct in assuming this creature would be kind. 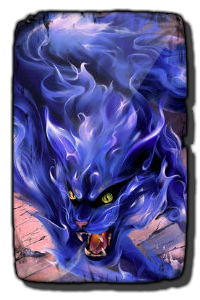 The woman would smile at the beast upon hearing the ever so true words of the beast. Sure, Akira could enter at her own will and authority for this place was hers, however her morals overthrew her role as owner of this village. "Yes, certainly I can. Nonetheless, even my guests need their own privacy to some extent. I can't simply deny them of their living right now can I? And I'm certainly no tyrant." The turquoise eyed woman would find herself sitting down upon a broken pillar made completely of sandstone. Those shinobi of hers sure did train their hardest, perhaps she would see what else they could use in this place, however, now was not the time. Akira would beam as she became highly excited to speak with this feline face to face.

"A-A virus?" A puzzled expression would loom over the demoness' face as the large feline told her story. A virus capable of bringing harm and disorientation to such an enormous being was a virus that Akira wondered why it had been kept a secret. Why did Shini not warn her of such a danger? This danger had come all the way to the front gates of her very family filling a rage within her vessel that wouldn't calm until she confronted her ally. The woman would shove the thought into the back of her mind for now, until the problem at hand was taken care of. Her people had fended off the threat and saved this cat's life leaving Akira with a surprised expression.

Akira would watch as the feline's claw emitted black lines of sorts; nonetheless, the demon was not afraid for many circumstances. First, she was obviously a demon meaning that no matter what happened her soul would always be able to return to any world that it was drawn. Second, this feline ad indeed earned her trust leaving her with no doubt in her mind about Matatabi's intentions. Last, Akira had nothing else to lose in this situation. Certainly, Akira's children barely knew her, so they would not skip a beat knowing that her soul had left this plain of existence. Her husband had left her for some reason she couldn't even begin to fathom to question for it was simply a waste of her sorrows. He hadn't returned to her but once, only to disappear again. He hadn't sent her any signal or sign of his whereabouts. He left her to fend for herself with her own village, plus Wonderland. If anything, Akira was begin to grow more angry at the thought, but that small twinge of pain in her heart continued to stay. Alas, there was no point dwelling on her saddened life now. Akira needed to look toward a future where everyone would know her name, where everyone would fear her name, where everyone would learn to respect her heart, a future where... no. That's not what she wanted. Akira just wanted to be happy. She just wanted to be loved. She just wanted to be safe.

» The Crook'ed Finger
by Kasey Yesterday at 9:17 am

» Regarding Organizations [OPEN]
by Hanzo Yesterday at 9:17 am

» Shifting Sands
by Anubis Yesterday at 9:16 am

» Airfare
by Soul Eater Rai'Oh Yesterday at 9:02 am

» Never Alone
by Yuki Yukiko Yesterday at 9:01 am

» Backyard Bows
by Jojo Yesterday at 9:01 am