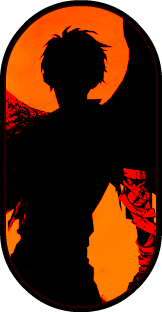 Name: Daemian Chaymin
Nickname: Dae, Daemian.
Gender: Male
Race: Angel
Age: 285
Birthday: 13th of August.
Sexuality: Bisexual.
Unique Characteristics:
All around his mouth are a mishmash of thin, silver scars and underneath that in his mouth, his teeth have been chiselled into sharp points, all his teeth being sharp and jagged. Because of this, he often wears either a red or black scarf wrapped around his mouth and neck. He also has a wicked scar across his eye, at the wrong angle, its not noticed. But a keen observer could make it out. This is on his left eye, and his left eye is unique and is explained later.
He also has giant wings, reaching around 24ft in wingspan. They drag across the ground behind him as he walks, and he also is incredibly slim, almost scrawny for his height.
Daemian's left eye is always shut, unless he is using spells.
The majority of his form is hidden by a long, black jacket that has tattered and torn 'edges' and also has slots cut through for his wings to push through. To help keep the jacket on his form, he wraps bandages around his right arm to keep it there. Underneath is a red shirt that matches the red scarf around his mouth.
Personality:
Daemian is a brilliant mix of complete and utter sarcasm, perfect innocence of other things, partial uncaringness, harshness which carries an air of calmness and wisdom. Although there is an undertone of anger and fury. However, top that with the rather unusual tendency not to swear and it's a fun experience for everyone to have. He also isn't really one to tolerate swearing and sorts regardless and will probably scold people if they do that around him. However, that being said, it's incredibly difficult to insult him properly, but when he is insulted, he'll lash back with his own sarcasm to attempt to outwit them and prove that he's the smarter guy. He takes the time to think things over, but often delves into sarcasm if he's uncertain. However, Dae doesn't just acting on a whim based from his emotions, preferring not to just dive in there and do things. He's more the kind to take a step back, and think about a situation before coming to a conclusion which he is willing to share. Answering things just off a whim is not just not his style.

However, he also has a darker side to him.

When he opens his left eye, something within Daemian snaps. Despite needing to open that to use his spells, it opens a floodgate to a corrupt personality within. The normal angelic creature becomes more sadistic. Things begin to care less and less as time goes on. He tends to go towards being more aggressive, taking more risks and, in general, acts quicker than what he should. He becomes angry, livid, and would be the kind of person to literally tear someones throat out with his teeth and not care. Daemian turns to bloodlust while he uses them, and morbidity is like an old friend. The man also begins to start being more animalistic, not caring what should happen to his body if it means that he's going to tear something or someone apart.
Likes:
-Reading.
-Wood and stone carving.
-Flight or flying.

Motivations:
-His own sense of anger and frustration.
-Getting rid of his own boredom in all honesty.
-Forgetting about what happened in the past.

Fears/Disgusts:
-He fears his own power overcoming his sanity.
-He fears people seeing his horribly damaged face and teeth.
-Love, friendship, he truly fears these things.

Eyes: His right eye is a gunmetal grey. His other is like the image below, with the grey area actually being black. If he uses spells during this, the black/red eye 'bleeds' across into his other eye.