Investigating a Rumor: Bandits and the Beast [Open] 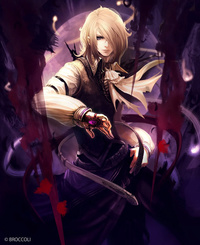 Investigating a Rumor: Bandits and the Beast [Open]

When he had the chance, he was finally able to visit another kingdom which he was granted access to. The Kingdom of Kai, or else what some people would call a land where humans and beings of supernatural entities live together in harmony. And supernatural meaning beings or powers that do not... really exist in this world, but is rather otherworldly. Aliens and growing technology was the first thing that came to his mind, but he never thought that it would literally become a place of humans and aliens. What he found more peculiar was how quickly night had fallen over the region, despite being sunrise almost an hour ago. Or maybe it was a powerful charm that the city was emitting? He was unsure. But it did make him curious.

He paid a visit to the local tavern, ordering a drink to rest up his weary legs. Sly tried not to pay much attention to the slimy noises and the guttural noises that some of the aliens were making to one another or to a a human. Despite their physical appearance, it seemed these... peculiar races were integrating very well with those of humans. Taking a seat at one of the stools that were up close to the bar, he tried to listen in on any latest news the kingdom would have. Wouldn't want to find himself caught not knowing anything and being taken advantage of.

However, he did not expect that the first thing that caught his attention was something involving bandits. In a shrine that, supposedly was not far from here. Although deep within the middle of nowhere. That place already had its fair share of ghost stories passed from child to child, or so he had read prior to coming here. Sly pulled out a small parchment, unrolling it to see the layout of the entire kingdom. He was just on the outskirts of these open lands, and the shrine shouldn't be too far from here.

The man to the side went on about how the bandits were attacking a beast, and boasted about the latter's freedom being in jeopardy. Thinking this would be something worthy to investigate, Sly gulped down the last of the lemonade and exited the tavern. Looking left and right, he adjusted his coat, shivering a little from the chilly cold the everlasting night was bringing. He should be alright, just needed to investigate the place a bit. Even if it turns out to be lie, it would not be a total waste if he could have a look around the shrine and study whatever history it has left behind.

Taking a deep breath, he started off the main path and towards the plains, stretching to the horizons with a number of tall valleys. Maybe he could climb to the top of one. He should be able to get a view of the shrine then. Strolling up the nearest valley, he took a few more breaths to calm his racing heart. He had done this before, and had hunted things much worse than mere bandits. Besides, it was not like he did not come here unprepared. Giving himself thoughts of encouragement had allowed time to pass by quickly, and very soon he was already on the summit of a valley.

A hand sheltering his eyes, he squinted and scanned the open lands, ignoring the eerie distant cries and a very thin sheet of blue mist that enveloped the ground between mounds.
« View previous topic · View next topic »