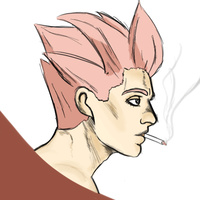 Personality: The first thing you'll probably notice about Notte is his pink hair which he takes great pride in, it comes from his father side of his family, you'll never see him comb it, only whispers in the wind tell us that he even takes care of it.

Additionally, there's his addiction to shoes, he loves them for no apparent reason having literal cupboards full of just shoes

Personality wise Notte is quite a chill person who obviously can get serious at times but rarely gets pissed off and doesn't lose his cool in most situations. he'll never run into a situation without a plan he sure would work, with his friends he's usually the stoner the guy that loves to joke around and just enjoy life in general, he tries to find his way in life with a smile on his face and dirt in his mouth

In a fighting situation, Notte again goes with his usual plan of thinking things out properly and trying his best to keep his cool, but occasionally due to his heritage if bad goes to worse he gets a disgusting sense of bloodlust, this might come from Notte's heritage or he might just be a violent person it's up for debate, inside he hopes that there's a reason for this need to killing in certain situations as he hates that side of him but he can't hold it back.

Notte also has quite an addictive personality, being addicted to tobacco and sneakers, Notte is again as mentioned a huge sneaker head, it might stem from the fact that when he was younger he was hated by his family so he never really got any cool shoes or cool clothes; Now he was the independents that allows him to get what he likes it's a sort of drug to him.

Fears/Disgusts:
- Finding out that the Universe and his life is meaningless
- There is nothing past his own world
- Never finding out info about father
- Mayo

Personality needs to be at least 300 words.

» Airfare
by Soul Eater Christine Today at 9:04 am

» Bloodbending Rules
by Yoshige Today at 9:02 am