Welcome Guest! Your last visit was . You have made 118 posts! Please welcome our newest member, Krokoro! 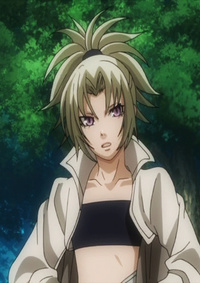 Alex had been quite more cheerful and happy today, no clue why this was going on but for those that knew her it had been usal for her at the very least. Tho people would think that the smell of death and rot that flowed all over the ruins of what looked like it used to be her home land. The area was called 'Kirigakure' she had been born and raised there her whole life, those she doesn't or can't recall what had happened to the place and to that of why her body its self-had been altered in ways that were very unpleasant. She plans to one day rebuild all of this land and re-create her beautiful and lovely homeland for all to see and enjoy, but that is no more than a pipe dream for her at this time. Because it seems that he had somehow also been aged backward and doesn't seem to have the same capabilities in the use of jutsus as she once had. So she must find out what has happened and must train even harder then she did before. On top of all that is the fact that she wishes to start a new family because her family is everything and it hurts her dearly to not have any around her. Those lucky for her strong will, she is fighting throw the pain and enjoying herself as much as possible. As she skips an dances down the streets while both dodging some random debris that falls from the decaying building and house. While at the same time isn't really watching for people while doing so as there aren't to many people wandering around the ruins that she lives in and those that are there know she does this a lot so they always keep an eye out for her.
Shini Chikai

Re: the Fading Tiger [Shini/Private]

It wasn't often that she wandered the last realm, but when she did, it was less for herself but for her village. Pandora was complex, but still she began to understand the chaos. Between time, everyone who was lost or forgotten had turned up eventually, even people long thought to be dead. After all, that was what this place was. This was their final stop before the next life, that was, if they were lucky...

She came from a world sicken with fear and plague. The Dark Times was what they had dubbed the period, only to change their own village name to such a thing. Shini remembered that girl's face, every day, wondering what would have happened without the wish. She wondered if the tale of her grand-nephew was true, and if it were different would she have the chance? There was many questions for her to ask, but still, none that could answer them. After all, not even Kaseki knew the origins of the Starfalls.

She dawned a white coat, one bare and plain. Upon her back was the large blade she had picked for herself out of the lot. To her, they were relics of a time long ago. In this world, they were powerless, dwarfed even. So many outworldly things, and so many of them seemed to react so strange to each other.  Her body was wrapped with the bandage, only to hold her chest closet to her, firmly set. Her stomach covered, only with the top of her chest exposed, just above her breasts. Her pants were red in color, woven of a fine silk. Her footwear taken from a neighboring country. Stitched leather and padded soles, unfit for a ninja, but held protection an maximum comfort. With each step, the echoes of her footsteps filled the silent village, all the while she wandered into the mist.

"Is anyone out there?" She called out, asking to see if anyone needed help. She had done her rescues far too often for her liking, but if she found a lost soul, it was never a wasted day.

» A Slave for Feet {Private}
by Soul Eater Christine Today at 6:22 am