Welcome Guest! Your last visit was . You have made 118 posts! Please welcome our newest member, Andalusa! 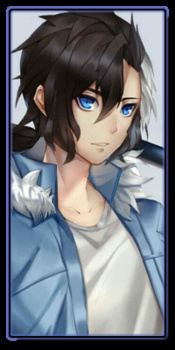 Name: Runic Release
Main Element: Fire
Sub Elements: Water, Nature, Spirit, Life
Usage: Manipulation(Item Usage)
Description: Most wouldn't believe a stone with a simple symbol on it could hold any kind of power. However, they are wrong. The use of rune stones is rare, but does exist. In particular, this form of usage is unique to Shane, though similar methods exist. These rune stones that grant Shane power are stored in a pocket dimension similar to that of an Ex-quip user, summoned forth in a similar manner to grant him powers. In order to use the power of one of the stones, the user must touch the symbol on the stone, and may only use one of these at any given time. Though all of them are summoned forth at once, only one will be active at any given time. Whichever stone is being used will emit a soft glow, granting Shane a certain power. The power granted depends on the stone, though examples include the ability to summon small fireballs with the fire stone, or water arms to hit an opponent with.

Name: Arsonist
Slot: Limited (Primary)
Ability: All fire spells have the innate Burn effect. Spell may not be mixed with any other element.
● Burn Effect: Target's inflicted wound deals an additional 50% the following post after the landed hit.

Name: Makeshift Gills
Slot: Limited (Secondary)
Ability: At the cost of 15MP a post, the caster is able to breathe underwater. This cost cannot be reduced by any means.

Name: Animal Form [Panther]
Slot: Limited
Ability: The user is allowed one animal form they can shapeshift into at no cost. This can be anything reasonable, such as a bird, lizard, dragon, tiger or so forth. While in this form they cannot use their lineage skill, items, or magic outside of the animal's own ability. HOWEVER, if the user has a Primary Spirit or Life, they are able to use spells while in animal form, as long as they are designated for that form solely They may also use their lineage ability as well.

Name: Animal Instincts
Slot: Limited
Ability: User is able to heighten their senses, by honing their primitive instincts. They are able to choose only one sense at a time, with a cooldown of 1 post, after deactivation.
● Hearing : The user can hear everything within a certain distance. (x3 his level in meters.)
● Sight (Night) : The user can see up to in the dark clearly. (x2 his level in meters)
● Sight (Day) : The user can pick up all subtle movements from his location. Allowing them to pick up on even the slightest of movements. (x8 his level in meters )
● Touch : By touching something, they are able to feel vibrations to sense objects in a certain vicinity. (x2 their his in meters) [Only if the target is moving]
● Smell : They can smell out all things. However this makes them more susceptible to all smells. (x4 His level in meters) going to ask center code be removed as it ruins uniformity of apps, also makes it a bit odd to read.

You only get 5 abilities in your magic.

one needs to go.