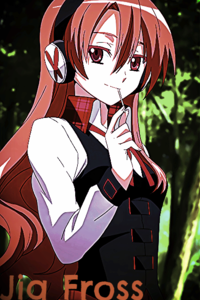 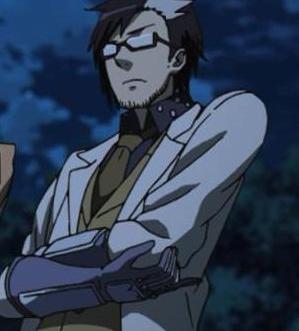 Name: Farris
Nickname: The First Elitist: The man of steel, Farris
Gender: Male
Race: Human
Age: 32
Unique Characteristics: He is always wearing his odd, thick gloves, and his glasses. You can't really see through his glasses, and no one really knows what the color of his eyes really are.

Personality: Farris is a doctor that works at one of the hospitals in Kanto. Of course, before he became a doctor, he had a strong love of Metal type pokemon, and he became fairly strong with them as well. He is a very carrying person, and usually likes to make sure that his challenger is up to the task of taking him on. He is very considerate for his summons, and the summons of others, and loves to help them out the best he can. 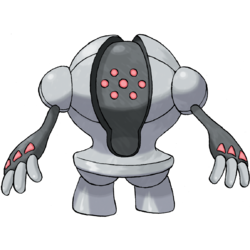 Summon Name: Registeel
Rank: C
Type: Steel
Gender:  Neither
Height: 6'4"
Weight: 350 pounds
Personality: No personality
Strengths:
~ He is extremely strong against ice and rock type attacks
~ he has a defense twice as strong as that of a regular C-rank.
Weaknesses:
~ Extremely weak against electric attacks (twice as much damage)
~ Very slow (relies heavily on long distance attacks because he would not fair well in melee)
Abilities:
~ Malleable Metal: Registeel has the ability to use his iron arms like rubber slings, flinging them forward towards the opponent at incredible speeds, causing D-rank attacks. 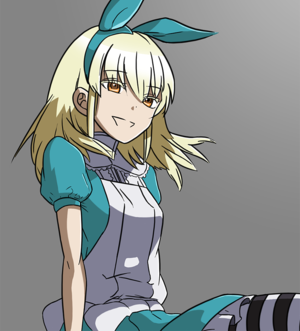 Personality: Dorothea is obsessed with fantasy stories, probably why she loves summoning so much. She is very considerate, but don't let that fool you, winning is the main thing she loves, and will try her hardest to make sure that her opponent doesn't win. 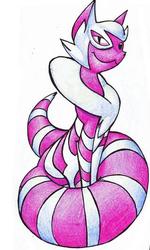 Summon Name: Chashirage
Rank: B
Type: Normal/Psychic
Gender:  Female
Height: 5'2"
Weight: 107 pounds
Personality: A vary maniacal thing which likes to play pranks on others. Just like Dorothea, this creature will stop at nothing to win.
Strengths:
~ Very fast
~ Very flexable
Weaknesses:
~ Weak against Dark/shadow attacks
~ Doesn't think through when it comes to plans
Abilities:
~ Can read Dorothea's thoughts.
~ Can float. 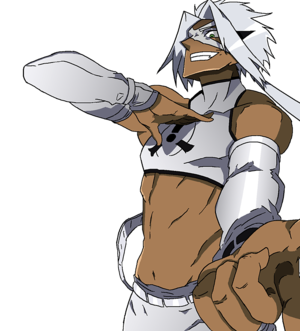 Personality: Barrak is a bit full of him self, and he isn't affraid to show it. Despite the jealousy he has towards his younger sister, the fourth Elitist, he still tries to show off using his lightning palls in an attempt to make the opponent bow down before him. He will not easily accept defeat, and if you win, he will pass you, but he will bitch about it. 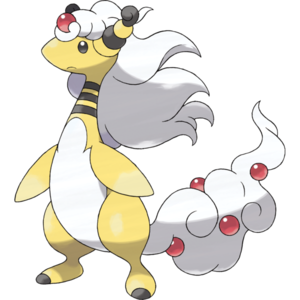 Summon Name: Ampharos
Rank:  B
Type: Electric
Gender:  Female
Height: 4'7"
Weight: 135 pounds
Personality: Ampharos is a very fun loving summon who loves to make her summoner happy. She shows sympathy and regret when she attacks an opponent, however, she will try her hardest to win the fight,
Strengths:
~ Strong against Steel attacks and water attacks
~ Good Speed
Weaknesses:
~ Not very agile
~ weak against ground attacks.
~ Too sympathetic.
Abilities:
~ Charger: Ampharos can paralyze the opponent for one post if they are touched by her wool. 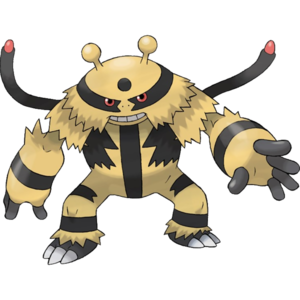 Summon Name: Electivire
Rank:  B
Type: Electric
Gender: Male
Height: 5'11"
Weight: 305 pounds
Personality: Electivire is a very cocky little son of a bitch. He thinks he is the best, and almost nothing will prove him otherwise. He will always be making cocky remarks, even if he is the one in danger. Of course, this cockiness of his can become a downfall when he refuses to except defeat, and stops paying attention to detail.
Strengths:
~ Water Types
~ Good for melee combat and mid ranged combat
Weaknesses:
~ Giant target
~ His body is not that fast
~ Weak against ground types.
Abilities:
~ Electric Whip Like extensions: Electivire can use his whip like extensions to attack targets up to 20 feet away from him. These extensions also cause electrocution to what ever they hit. 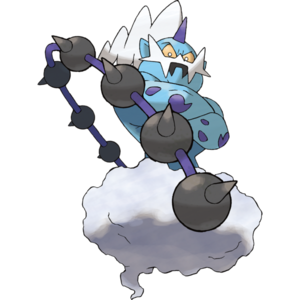 Summon Name: Thundurus
Rank:  A
Type: Electric/Flying
Gender:  Male
Height: 8'5"
Weight: 143 pounds
Personality: Thundurus is powerful, and knows he is powerful. Along with that and his high intellect, he is an expert strategist. He, unlike Electivir, is not cocky, and is constantly keeping an eye out for his opponents weak spots.
Strengths:
~ Very Strong Physically
~ High defense
Weaknesses:
~ Not very fast
~ Large Target
Abilities:
~ Storm Gods Cloud: The black , cloud like tail of his is used as a defense mechanism.
~ Flight 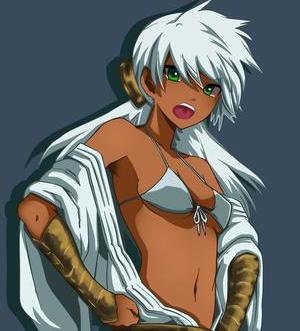 Personality: Adrenilda is a very calm women. She thinks her actions through, and often gives encouragement to both her summons, and her opponent. Unlike her brother, Barrak, she is not an Elitist in order to come out on top, she is an Elitist in order to help the development of other Monster Trainers. Of course, that doesn't mean she will go easy on you. Thanks to her friendship with her summons, they have evolved to a level almost unheard of! Not only are they all fighting types, they are also X-summons. 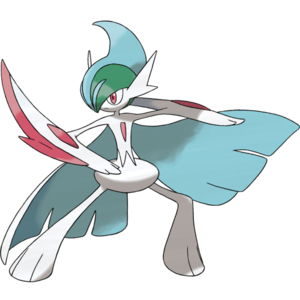 Summon Name: Gallade X
Rank:  B
Type: Fighting/Psychic
Gender:  Male
Height: 5'3"
Weight: 124 Pounds
Personality: Gallade is a very loyal summon. He never questions what he is asked to do, and just does it. He doesn't tend to take things too far though, for he has great self restraint due to all of the training he has gone through with Adrenilda
Strengths:
~ He is very fast (running up to 35 mps)
~ He is very strong physically
Weaknesses:
~ Flying type attacks
~ Wind attacks
~ He can get tripped up easily by rock type attacks if he isn't paying attention.
Abilities:
~ Inner Focus: Gallade is immune to all debuffs of B-rank or lower. 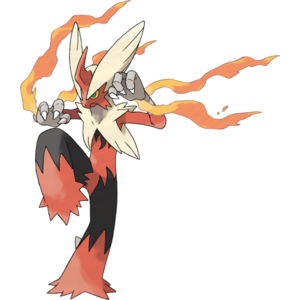 Summon Name: Blazekin X
Rank:  A
Type: Fighting/Fire
Gender:  Male
Height: 6'3"
Weight: 118 pounds
Personality: Blazekin is a very active summon. He rarely ever stays still, and prefers to just bombard his opponent with attacks whether then wait and try to plan out a strategy.
Strengths:
~ Fast
~ Physically powerful
Weaknesses:
~ Psychic types
~ Water Types
~ Very Reckless
Abilities:
~ Fire Fur: Any physical contact with Blazekin leaves in a burning effect which gets rid of 2% hp per post for 3 posts. Of course, this is renewed if he directly touches you again. 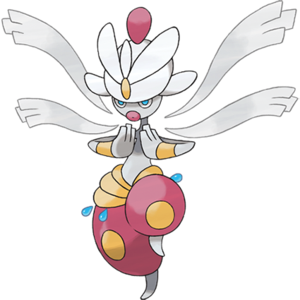 Summon Name: Medicham X
Rank:  A
Type: Fighting/Psychic
Gender:  Female
Height: 4'8"
Weight: 85 pounds
Personality: Medicham is a very calm spirit. She typically doesn't react first, and always waits for the opponent to make their first move. She tries to spend most of the time dodging attacks, waiting for the opponent to lost most of their MP and stamina before she goes in and fights back.
Strengths:
~ Patient
~ Fast
Weaknesses:
~ Average speed and strength (compared to the other Spirits, this is a weakness)
~ Having a tactic of her own, it sometimes means that she can easily fall in other peoples traps.
~ She can tier herself out from dodging.
Abilities: 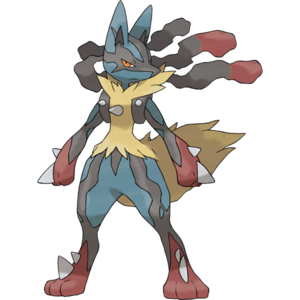 Summon Name: Lucario X
Rank:  S
Type: Fighting
Gender:  Male
Height: 5'5"
Weight: 155 pounds
Personality: Lucario  is a very relaxed fighter. He goes in for the hits he knows he can land, and he leaves nothing up to chance. His goal is to win, and that is all.
Strengths:
~ Physcially Strong
~ High intellect of almost all summons bodies, meaning he knows their week points.
Weaknesses:
~ Psychic types
~ Flying types
~ Steel types (NOT GROUND TYPES)
Abilities:
~ Avenger:  Lucario gainst 15% in strength each time an attack lands on him.