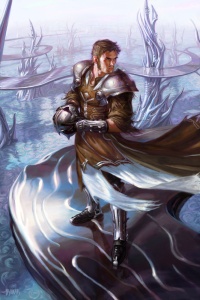 So, since I was super bored yesterday, I ended up assigning colors from Magic: The Gathering to most of the people on site >.< Here's a list, along with a key to decipher them.

NOTE: Most of the colors are such that no beings who are only a single color exist. Everybody in reality, and almost everybody in fiction, has multiple colors, and a character will not have every trait of a particular color.

General information: The five colors of magic are often placed in a pentagon formation, with any one color having two colors next to it and two across from it. The colors that are next to it are its allies, which it often shares traits with. The two across from a color are it's enemies; enemy colors often have a major clash in ideals, such as life vs. death and order vs. chaos. The color pie is arranged like this ; we'll start from the bottom right one and work our way clockwise.

Black (B ) is the color of selfishness. Black characters are highly individualistic, valuing people solely on merit. To a solely black character, the strong can (and deserve to) dominate the weak. A black character will never do something unless there is something they can gain from it; altruism and social bonds are foreign terms to them. Since black characters only care about themselves, death bothers them significantly less than it does other colors; after all, if they died, they must be weak. Note that black does not mean evil; while selfishness is certainly biased towards that end of the spectrum, black characters can be as heroic as the rest of them (as long as they gain something from it). That being said, black is often the color of the villain or antihero.

Red (R) is the color of emotion. Red characters are like Black in that they value themselves, but they also highly value those close to them. Red characters have trouble thinking things through, often acting before they think; those actions also tend to be rash. Red is the most passionate color; if your character is incredibly passionate about one thing or another, whether that thing is good or bad, there's a good chance there's some red in them. As the color of emotion, red is highly impulsive; they think things through very little before going off on their path. Red is the color most often associated with the typical hotheaded anime protagonist; most of the Kingdoms on this site have a red protagonist in their anime. As a result, red is the most common color on the site.

Green (G) is the color of harmony. Whereas the other colors all seek to impose their own will on the natural order, green lives alongside it; they are the preservers of nature's status quo, to put it one way. To go with this trait, they place very high values on tradition, not often venturing out of their comfort zones. They place values on community, not in a societal sense, but in a sense of mental stability. Green dislikes the artificial, seeing it as overriding nature; as such, a purely green character is often highly naturalistic and anti-civilization. Finally, a key characteristic of green is the preference to act on instinct, not through logic. Albeit not as much as red's maddening impulses, green characters dislike over thinking things and prefer to go with their gut. Green is the color of the wise mentor; they do not often directly intervene, but they guide the main protagonist through the story.

White (W) is the color of order. Whereas it's two enemy colors, black and red, are selfish and chaotic respectively, white is selfless and orderly. A purely white character is a supreme altruist: They place no value on the individual, and insane value on the group. White is the color of order; they are the color that pushes laws so that everybody can be safe. White is the ultimate societal color. Social butterflies and great leaders of large countries are prime examples of white at it's best; charismatic, friendly, willing to give for the greater good, and making laws and rules to protect their society. White, as the most selfless color, is the one most bothered by death; in a white-only world, nobody would die and society would be completely safe. White is also the easiest color to overdo, however, as it's bad side is simply an extreme extension of it's good side. White can easily become overbearing, stifling, and boring; since they value community so much, nobody wants to do extraordinary things since it would separate them from said community. As such, a white-only society would quickly fall into stasis. White is the color of the 'traditional' fiction protagonist; altruistic, arguably naive, can do no evil. It can also be the color of the well-intentioned villain.

Blue (U) is the color of knowledge. Blue lives entirely for the thrill of discovery: If an all-blue character isn't constantly learning new things or studying, they're miserable. They are incredible thinkers, able to make astounding breakthroughs through their constant studies. As the color of knowledge, Blue is also the color of logic; they have emotions, but they lock them away in order to better pursue their goals. They are also the most artificial color; they are constantly improving on the natural design and overwriting it with their seemingly better designs. Blue is a believer in self-actualization; to them, nothing is set in stone, and you can pursue whatever path you desire. Blue rejects emotions and chaos, as they are objects that reduce their ability to discover and make progress; as such, they create laws to prevent such disturbances. A blue character is the Intellectual of a novel; he knows immense amounts, and is often a friend or ally of the main protagonist, but lacks the spark of ambition and desire to step into the protagonist role himself.

Of course, very few people fit into just one color; the world is a complicated place, after all. To save space, here are the combinations and a few notes on what they mean.

BW: Black's individualism and White's societalism collide. If the black influence is stronger,the character works to preserve a single group (IE a Mafia Boss). If white is more prevalent, you end up with a Lawful Evil official (like a corrupt senator).

RW: Red's chaotic and impulsive tendencies combine with White's order and societalism to form the color combination of the army. People of this color are often generals, or are otherwise good at leading large groups.

RU: Red's impulses and chaos combine with Blue's drive for progress to create a being that has sudden, immense bursts of not-quite-safe progress. This is the color combination of creativity, and it is often the least stable combination.

GB: Green's desire to preserve natural cycles combines with Black's desire for control to make a being that oversees natural cycles. Life and Death is the most typical one, since green is closest to life and black is closest to death out of the colors, but any natural chain or cycle can be the subject.

BU: Black and Blue combine their desire for control in this color combination, leading to a shrewd, scheming intellectual. BU characters are the most likely to be pulling the strings behind the scenes, keeping their true motives and desires hidden until the end.

UW: Blue and White combine their orderly tendencies in this combo, creating the epitome of bureaucracy. A UW character's dream is a bureaucratic society where everything is documented and progress is made.

WG: White and Green merge their fondness for community in WG. A WG society is like a hive mind, where individualism is almost totally erased.

RG: Red and Green combine their impulsive, instinctive tendencies in RG. If red is stronger, the character is often a berserker who acts completely on impulse; if green is stronger, you get a shamanic warrior who reveres the natural order and fights to preserve it.

RB: Red-Black is often called the most hedonistic combo. Red's impulses combine with Black's selfishness to create characters who act without thought, and only on their own interests. RB is the color combo that most closely resembles Chaotic Evil, often injuring and even killing others to satisfy their own desires. To a Red-Black character, nothing is truly sacred.

Wow, that took a lot longer to write out than expected >.> I'll write out the character colors and their inspirations later. For now, feel free to go through and argue/comment on what colors you think your characters would be (if you can get through the wall of text, that is 0_0 ).
Kaseki

Okay. I'm gonna do the characters in bursts so that I don't end up with another monster post again >.< Here we go!

Kaseki: BG
I thought Kaseki would be a great fit for Black-Green, given his current position. Black is from the influence of his father, Death, and from the fact that he often acts with ulterior motives. He does care about his community and the people under his guidance, though, giving him a distinct green side. Green-Black is a color combo that enjoys managing natural cycles, and Kaseki's position as Ruler of Pandora allows him to oversee all of them, so he fits under that well also.

Sonya: RGW
Sonya has three colors: Red, Green, and White. Sonya is a very selfless and caring young fairy, as well as an able ruler, giving her White. She has a deep connection with nature and the natural order, making her Green as well; add in some Red to offset the controlling aspect of White and to give her extreme passion, and you have a wonderful little fairy.

Shini Chikai: RGW
Shini is very similar to Sonya in that they are both selfless, able, and caring rulers, giving them both similar color combinations; whereas Sonya leans more towards the White end of the spectrum, however, Shini leans towards Red. Shini is more impulsive than Sonya, and is more selfish as well (although she would still never do anything that hurts her people).

Alexei Sarona: RB
Alexei is predominantly red, and immensely so. The only red trait he lacks is impulsiveness; he has an extreme bias towards chaos rather than order, forms tight bonds with a select few people, and has the characteristic extreme passion. He is more self-serving than the usual Red character, however, and has extreme individualistic ideals, giving him Black as well.